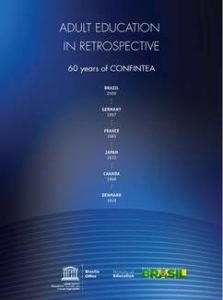 Over the last six decades UNESCO has promoted six International Conferences on Adult Education, which have become known more recently as CONFINTEAs. The CONFINTEAs have established themselves as one of the most influential forums in the international Adult Education arena. Over their sixty year life-span, these Conferences have debated and established the principle guidelines for global policy in adult education for the period between one Conference and the next – and, in certain more unsettled situations, impeded the disappearance of Adult Education from the political agenda in diverse countries.

A book by Timothy Ireland and Carlos Humberto Spezia, published in 2014, is inspired by the desire toregister the long fecund history of a global movement which has spanned six decades. The editors consulted and made use of official records and documents produced by and for the conferences, in particular the final reports, elaborated by UNESCO. This process of historical recovery became equally important as a means of undertaking a transversal reading of the development of the very concept of adult education, embracing the post-war years, the period of decolonization, the Cold War and the attack on the twin towers in New York.​

You can find further information here.