Nelida Cespedes, ICAE Executive Council Member and Honorary President of CEAAL (Latin America) was the keynote speaker at the recently concluded ACE Aotearoa National Conference 2018 held in Wellington, New Zealand from 12-14 June. Nelida contributed to the conference theme “Becoming Global Citizen” by sharing her experience on the role of popular education in advancing global citizenship. She spoke passionately about how Paulo Freire influenced their work in popular education that recognised how people’s struggles are a powerful site for lifelong learning in becoming better global citizens. She quoted Freire saying “citizenship does not come by chance: it is a never ending construction, which requires fighting for”

Robbie Guevara, ICAE Vice-President for Asia- Pacific, conducted a workshop on “Weaving Youth Voices in Lifelong Learning through Global Citizenship” and facilitated a closing activity for the conference based on the Lifelong Learning Beads to highlight the challenges faced by adult and community educators in advancing the concept of lifelong learning. The LLL beads were based on the concept developed by educators from Aachen, Germany and recycled paper beads produced by the Lao Disabled Women’s Association through the assistance of ICAE VP for Europe, Uwe Gartenschlaeger.

After the conference both Nelida and Robbie met with the Secretary General of the New Zealand UNESCO National Commission, Vicki Soanes. During the meeting Nelida shared a copy of the CONFINTEA VI Regional Report from Latin America, while Robbie shared a copy of the stories from the Youth Action Research project that ASPBAE had conducted in India, Indonesia and Philippines together with the UNESCO Institute for Lifelong Learning (UIL) to empower marginalised girls to advocate for their right to quality education. 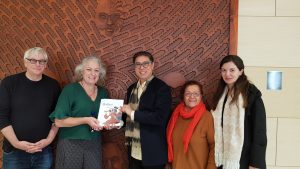